The bag making process of flexible packaging is called the "most complete" version in history!

1Introduction to process flow and procedure 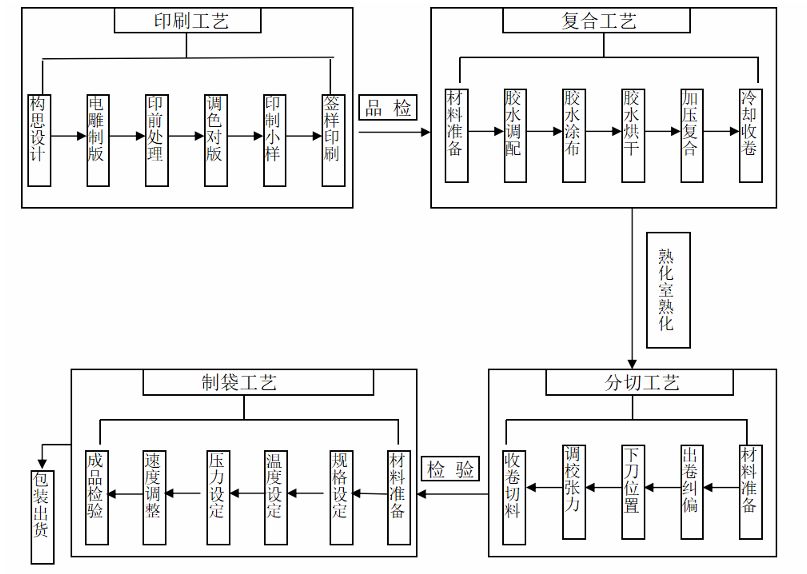 1) The plate making process is a process of manufacturing a printing plate that functions to transfer ink to a printing material during printing. The color of the original image is reproduced through the halftone dots made on the printing plate.

According to the type of printing plate: gravure, flexographic, screen, letterpress, lithographic printing.

Most of China's flexible packaging is produced by the gravure printing process. During production, printing materials are discharged into the printing device through a unwinding device. The ink on the surface of the printing plate is scraped off by a scraper. After entering the oven, the solvent components in the ink evaporate in the heated and blown oven. After the printed film comes out of the oven, it passes through a cooling roller and is cooled and shaped. During multi-color printing, the computer's automatic overprinting device controls the overprinting between the colors. After printing is completed, the winding device takes up the printed product into a roll film.

Most of the flexible packaging is produced by the dry composite process. During production, the glued substrate is discharged into the glue coating device through the unwinding device, and the glue on the surface of the glue roller is scraped off by the scraper. When contact occurs when pressing, it is transferred to the surface of the gummed substrate, and then enters the oven, and the solvent component in the glue is volatilized in the heated and blown oven. After coming out of the oven, it is bonded together with the substrate released by another unwinding device in a heated and pressurized composite nip roller. After being cooled and shaped, it is taken up by a winding device into a rolled composite film.

6) Slitting is the process of cutting the composite film or printed film that does not need to be compounded to the required width. During production, the slitting material is discharged through the unwinding device, and the longitudinal travel position of the slitting material is controlled by the photoelectric control system, so that the cutter position of the slitted product is kept constant. The winding device rolls the slit product into a roll film. Some of the slit roll film is used as the finished product for the customer's automatic packaging machine, and some is used as the semi-finished product to be transferred to the next process for bag making.

Note: The film in the above table refers to cast film or inflation film. Bidirectional stretch film cannot be heat-sealed into bags. It can be heat-sealed after coating a layer of heat-sealable material. For example: KOP means OPP coated with PVDC. membrane.

There are two kinds of heat-sealing materials commonly used in bag making: CPP and LDPE. In the case of the same thickness and film making method:

Transparency: CPP is better than LDPE.

Quite hardness: CPP is better than LDPE.

1) Unwinding device: Place bag-making materials, provide materials for heat-sealing on the palm, and control the tension of the released materials.

It consists of a seat frame, a discharge shaft and a magnetic powder clutch.

2) Heat-seal cooling device: heat seal the joint material at the palm and cool it down.

It consists of a heat-sealing (left and right) knife, a pressing wheel, and a blowing device.

4) Traction device: The traction clutching material travels on the machine to control the speed of the clutching.

It consists of motor and nip roller.

5) Rewinding device: Rewind the bag-making material that has been folded into a roll.

It consists of winding frame and transmission belt.

It consists of a discharging device, a traction device, a heat sealing and cooling device, a photoelectric control device and a cutter device.

It consists of a discharging rack and a braking device.

2) Traction device: Traction bag-making materials travel on the machine, control the speed and tension of bag-making, and control the feeding position with the photoelectric control system.

It consists of motor, pinch roller and floating roller.

It consists of a frame, a heating plate, a heat sealing knife, a cooling plate, a spring, and a silicone plate.

4) Photoelectric control device: It controls the longitudinal position of the bag-making material during stepping, and provides guarantee for the accuracy of the cutting and heat-sealing position. The photoelectric detection head can choose a variety of reflective material positions for detection.

It consists of photoelectric detection head and control box.

It consists of upper and lower cutters and connecting rods.

It consists of a frame, a reel, and a material detection device.

2) Forming device: Form the sheet-like composite material into a folded shape to align the front and back patterns.

It consists of two 45 ° forming plates, a cutter, and an alignment adjustment roller.

It consists of a frame, a heating plate, a heat sealing knife, a cooling plate, a spring, and a silicone plate.

4) Tension control device: control the tension of bag-making materials during unwinding, forming and heat-sealing to meet the requirements of bag-making.

5) Photoelectric control device: Control the longitudinal position of the bag-making material during stepping, to ensure the accuracy of the forming, heat-sealing, die-cutting and bag-cutting positions. Detection object.

It consists of photoelectric detection head and control box.

It consists of motor, upper and lower nip rollers.

It consists of upper and lower cutters and connecting rods.

It consists of a feeding base, a tension control device, a folding frame and a punching frame.

1) According to the inner width of the back-sealing bag and the size of the organ, select a suitable molding board for installation on the machine.

2) Set the heat sealing temperature according to the material structure and process speed.

5) The cold wind blown by the fan cools the heat-sealed and pressed heat-sealed position to make it cool and set.

6) The rewinding device rolls the heat-sealed bag-making material into a roll shape on a rewinding rack.

1) According to the requirements of the horizontal sealing width of the bag, select a suitable heat sealing knife to install on the machine.

2) Adjust the unloading and feeding tension to make the material run stably.

3) Set the process temperature according to the material structure and bag making process speed.

6) The traction device sends out the heat-sealed continuous bag material and cuts it into a single divided bag by a cutter.

After the bag-making material is heat-sealed at high temperature, it needs to be cooled and shaped to make the heat-sealed place flat. At present, the cooling devices of the three side sealers are water-cooled. Pay attention to connecting cold water during production.

The heat-sealed, cooled and punched bag-making material is sent out by a traction roller and cut into individual bags. The cutter position is controlled by the photoelectric detection head position. When the upper and lower knives wear out and become dull, there will be continuous cutting of the bag or burrs at the knives.

The effect of heat-sealing temperature is to heat the adhesive film layer to a more ideal viscous state.